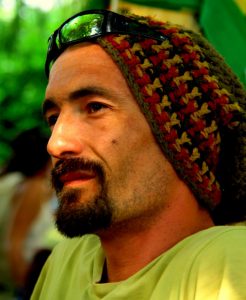 Trenel Pão de milho (Christie) was born in Scotland and has had a passion for music, dance and performance since an early age. He is a classically trained musician and plays violin, piano, guitar, percussion and berimbau.

Pão lived and worked in East Africa after leaving school, where he developed his enthusiasm for cultural dance, African music and percussion. He visited Brazil briefly in 2000 and started to train Capoeira one year later in Devon, officially becoming a student of Mestre Marcelo Angola in 2005. In the summer of the same year, Marcelo & Pão founded the group Capoeira Angoleiros do Mar Devon.

Pão moved to Cornwall in 2015, where he has now set up Angoleiros do Mar Cornwall and continues to teach capoeira and share his knowledge and love of this Afro-Brazilian art form. He is grateful to the guidance and support of his Mestre Marcelo Angola and all of the Angoleiros do Mar family living and working in Europe.

Pão was given the title of Trenel in 2009 and is still only one of a few teachers for the group who does not originally come from Brazil. Pão de milho (meaning ‘bread of corn’ ) was the Capoeira name given to him by Mestre Marcelo Angola. Although he is not from Brazil he shows great passion, understanding and respect for Capoeira Angola and has 18 years experience in the art form. 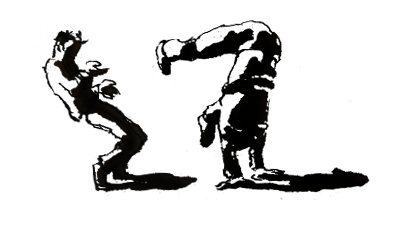 Years teaching for Angoleiros do Mar